Once Upon A Time

I wanted to write a blog post on a series that I am completely addicted to. I usually am not one of those people who steadily follows series (no, not even those Disney cartoon series like the Rescue Rangers etc.), but this series has definitely grabbed my full attention. The series that I am referring to is called Once Upon A Time. It is a new series which is currently still being aired in America. The series centers around a town called Storybrook. All the people who live in that town are characters from fairytale land who have been sent to the real world through a curse, cast by Snow White's evil queen. In the town time has stopped and no one is able to leave the town... If they try 'terrible things happen'. None of the characters (well... perhaps with a few exceptions) have any memories of their past lives in fairytale land; no memories of true loves kiss or even of a faithful bite in an apple. The evil queen has done everything in her power to prevent a happy ending for any of our favorite fairytale hero's and heroines. There is only one person that can break the curse; the only one that got away... The daughter of Snow White and Prince Charming.

After reading my summary some of you might think that the story must be filled with clichés. The opposite is true. Many of the stories have been reworked and although I am a huge fan of the originals, some of them have become just a tad more interesting. Due to the many plot twists the story is completely unpredictable, causing you to be pleasantly surprised during almost every episode.

The cast (the names will lead you straight to their IMDB pages) has some outstanding actors such as Jennifer Morrison (who plays role of Emma, the daughter of Snow White and Prince charming), Ginnifer Goodwin (Snow White) and Lana Parrilla (the, very, very convincing evil queen). Though the most superb actor, who really makes the show, is Robert Carlyle who plays the role of Rumplestiltskin. 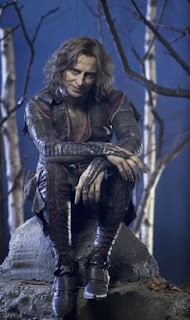 I can hear some of you think: Rumplestiltskin? That cannot possibly be all that special.... Well you would be surprised! As I said before, they reworked some of the stories completely and the story with perhaps the most impressive makeover is that of Rumplestiltskin. He has been turned into the ultimate bad guy; the puppet master who carefully manages the entire charade. He almost takes on the role of Satan: if you want your wish to be granted, you will have to give him something in return. For, 'all magic comes with a price, dearies'. This price can be a variety of things: your first born or maybe just your coat. Upon first seeing Rumplestiltskin you will find yourself thinking: OMG this guy just freaks me out. O.o He is evil and completely mad! But the more you see of this character, the more you find yourself mysteriously attracted to him, even to the point that you can actually imagine why the other characters accept a deal with him. Throughout the series you will find out how Rumplestiltskin became the evil man he is now (for 'evil is not born, it is made') and you will gradually actually start to understand him, which makes him even more compelling as a character. (Urgh! It is so hard not to insert any spoilers, cause he is just so freaking awesome!).

The first season will have 22 episodes in total and tonight they will be airing episode 17 'Hat Trick', which will center around the Matter Hatter from Alice in Wonderland. I just can't wait to download the episode tomorrow morning! :D

Well I hope that this review will have induced some of you to actually go and watch the series, because I really do believe that this show deserves a very wide fan base. If you wish to know where you can download the episodes, let me know in a comment and I will give you the link ;).

Well some of you already know but I decided to buy a Wii console. I am not a very advent (let alone good) gamer, so I certainly did not buy it to play Mario Carts or anything (although that game did come with the console). No, I bought it to be able to gain exercise with the Wii Fit Plus system. It took me a very long time to decide whether or not to buy it, since the system does not come cheap (the console it self cost me 133,- euros and the Wii Fit pack (game + balance board) cost me 88,- euros). I have had the game for about three days now and I thought it would be nice to write a review on it.

As many of you know I am very busy with work and school and can therefore not find the time to join a gym or something. However, I noticed that because I do not get enough exercise I was rapidly losing my energy. I thought the Wii Fit Plus system would be the perfect solution, since I would not have to leave the house (and loose 30-60 mins traveling time). Although I have only been using it for three days now, I have to admit it really does what it promises... I feel the muscle ache already hahaha.

The introduction of Strange dreams galore and Nightmare alley

As some of you might know, my sleep is usually plagued by dreams which are mostly scary or weird. I have been doubting whether or not to write them in my blog as I would not know if people would be interested in reading them. However, as several people have actually told me that I should write them down, I will be adding a special section to my blog called ‘Dreams’. This section is again divided into ‘Strange dreams galore’ and ‘Nightmare alley’ (if anyone has a better name for either of the sections feel free to share hahah!).

I expect the ‘Nightmare Alley’ section to be updated most frequently, as I tend to have a lot of scary dreams. Before I start describing my dreams it might be wise to state here that I hardly watch any science fiction movies or series (the only one I am currently watching is Eureka) and that I really do not have a vampire, werewolf etc. obsession. The last series that I actually watched which had vampires in it was The Vampire Dairies, which was about a year ago. Also, I do not play any videogames, except for Terraria (which is a platform game that does have some flying eyeballs and zombies in it… But I have never encountered those in my dreams haha). The reason why I write this is to testify that the similarities between my dreams and an actual series are purely coincidental.

Today I will start off with my first entry for the ‘Nightmare Alley’ section. I had this dream about a year ago, but it is still vividly engraved into my memory.
Read more »
Labels:Dreams: Nightmare alley,Dreams: Strange dreams galore | 0 comments
Email This BlogThis! Share to Twitter Share to Facebook
Newer Posts Older Posts Home
Subscribe to: Posts (Atom)